Castles of Caledon Inspired By Royalty 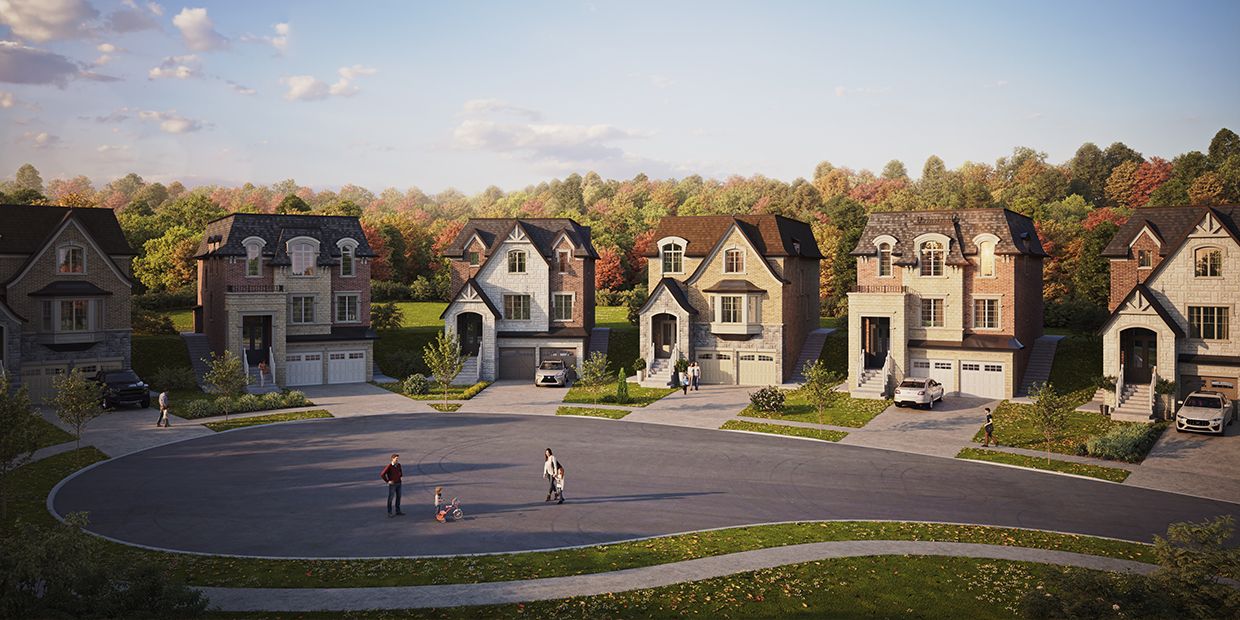 Many people dream of living in a castle. And for most of us, the reality of living in one is confined to our favourite childhood stories. However, the Castles of Caledon,  Indesign’s latest offering,  is a select community offering families the opportunity to live life like monarchs in a picturesque community setting. The exclusive development offers only 19, 38' and 50' singles boasting extraordinary 80-foot deep yards each backing onto lush conservation.

These homes have everything you need to live happily ever after: spectacular square footage, grand outdoor spaces, luxurious finishes and much-needed privacy. The only elements missing are the moats and drawbridges, but we can do without them.

Around the world, castles play an important role in telling a region’s history. They’re symbols of cultural significance expressing military and political power.

To honour the diversity of Caledon East, Indesign has named some model homes after castles and royalty from around the world. Continue reading to learn more about the rich history behind the names.

Overlooking the town of Sintra, Palácio da Pena (Pena Palace) is one of the most recognized tourist attractions in Portugal perched on the rugged northern peak of the Sintra Mountains.

Historically, the palace was first a chapel dedicated to the Lady of Pena. Then, the construction of a monastery was ordered by King Manuel I, the Royal Monastery of Our Lady of Pena. Unfortunately, The Great Lisbon Earthquake of 1755 left the monastery almost entirely in ruins. Nevertheless, the monastery served as a small, quiet place for meditation, housing eighteen monks even after destruction.

Almost a century later,  King consort Ferdinand II (husband to Queen Maria II)  found beauty in ruins and acquired the monastery and its extensive grounds.  Intended as a summer refuge for the Portuguese royals, the king’s love of Pena’s artistic architecture led him to extend the pre-existing construction to a palace.

Today, Pena Palace is a magnificent profusion of architectural styles most exemplifying the 19th-century exotic taste of Romanticism. The eclectic mixture of styles includes Neo-Gothic, Neo-Manueline, Neo-Islamic and Neo-Renaissance.

Notable attractions include the vibrant Queen’s terraces with picturesque views of the region, the three sumptuous staterooms, the Chalet of Countess Elda, and Parque de Pena’s tree-covered grounds.

Within the forested Sologne region of the Loire Valley, peacefully laying on the bank of the Cosson River, Château de Chambord is a shining emblem of the French Renaissance.

Grand in stature and style, the palace is a harmonious fusion of traditional French medieval forms with classical Renaissance structures. The château, built between 1519 and 1547 CE, was originally the site of a medieval hunting lodge used by the counts of Blois. Later, Francis I, a lover of fine art and the hunt, commissioned the palace’s construction to serve as a hunting retreat for him and his entourage.

Although the exact designer remains unknown, Château de Chambord is undoubtedly influenced by the work of Leonardo da Vinci. At the time, Francis I invited Leonardo to live in France as the "first painter, architect and engineer of the king."

Notable attractions include the double helix staircase set in the centre of the castle. The infamous spiral staircase allows guests to ascend on one side without meeting or making eye contact with those descending on the other. There are 426 rooms, 83 staircases, 282 fireplaces and 360 ° terraces with panoramic views of the enchanting grounds.

The Domain of Chambord encompasses the château, a village, farms and a wooded area. A highlight of your visit will be the park. The gardens cover 5,440 hectares of flora and fauna, surrounded by 32 kilometres of alls. The Château de Chambord garden is the largest enclosed park in Europe and is as vast as the city of Paris.

Here’s a list of the other homes inspired by nobility in the Castles of Caledon collection:

Try hitting the tab key and notice how the focus stays within the modal itself. Also, esc to close modal.